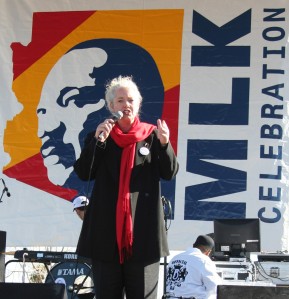 As I enter this new chapter in my life I am reflective of what I have experienced up to this point. On November 3, 2008 I was invited to participate in a No on AZ Prop 102 Rally at the corner of Camelback and Central Ave. That evening several community leaders bowed to pressure by other community leaders and made a choice not to attend. More than 500 people were in attendance that evening. The rally greeted community leaders Meg Sneed, School Board Representative Jimmie Munoz and faith leaders with enthusiasm and appreciation.

The crowd was energized and excited to have their voices heard. The crowd expressed being frustrated because they had felt silenced. One week later after the passage of Prop 102 and similar amendments in CA, AK and FL the community gathered again for what was billed as a candlelight vigil. Again, the crowd was outraged and expressed their desire to act – to Stand Up – Step Out and have their voice heard. The crowd expressed their desire to be active participants in moving forward and remaining visible.

At both rallies I listened to the stories of people of all ages and from all walks of life describing the injustices they have experienced in our community as a direct result of their sexual orientation/gender identity.

The following Saturday at the Old Phoenix City Hall 5000 people came downtown to Stand Up – Step Out and have their voices heard for Civil Equal rights. We were joined at the rally by former Arizona Senator Alfredo Gutierrez, Rebekah Friend Ex Dir and Sec/Tres of the Arizona AFL-CIO, emreging leader Meg Sneed guided the crowd through the multitude of speakers including faith leaders, entertainers, etc.

We then marched to the Arizona State Capitol.

The time to stand together is now.

It is time for us all to Stand Up – Step Out – United together to say enough is enough I stand for Human, Equal Civil Rights for All.

The journal of us!

Girl in a Party Hat

Sophie has Down syndrome -- and she's off to kindergarten.

Continuing the dialog from the NSA Convention

As a certified Spiritual Coach, Reiki Master/Teacher and Tai Chi instructor it is my passion to help, heal and spread the light to all

4 out of 5 dentists recommend this WordPress.com site

Arizona Consortium for the Arts

May you live in interesting times. We do...and love it! And I am happy to share our lives with you!

The greatest WordPress.com site in all the land!